Yesterday, I was to talk for about 30 minutes to some students who are looking at classical electron models as part of an attempt to try to model what might be happening to an electron when moving through a magnetic field. Of course, I only had time to discuss the ring current model, and even then it inadvertently turned into a two-hour presentation. Fortunately, they were polite and no one dropped out—although it was an online Google Meet. In fact, they reacted quite enthusiastically, and so we all enjoyed it a lot. So much that I adjusted the presentation a bit the next morning (which added even more time to it unfortunately) so as to add it to my YouTube channel. So this is the link to it, and I hope you enjoy it. If so, please like it—and share it! 🙂

Oh! Forgot to mention: in case you wonder why this video is different than others, see my Tweet on Sean Carroll’s latest series of videos hereunder. That should explain it. 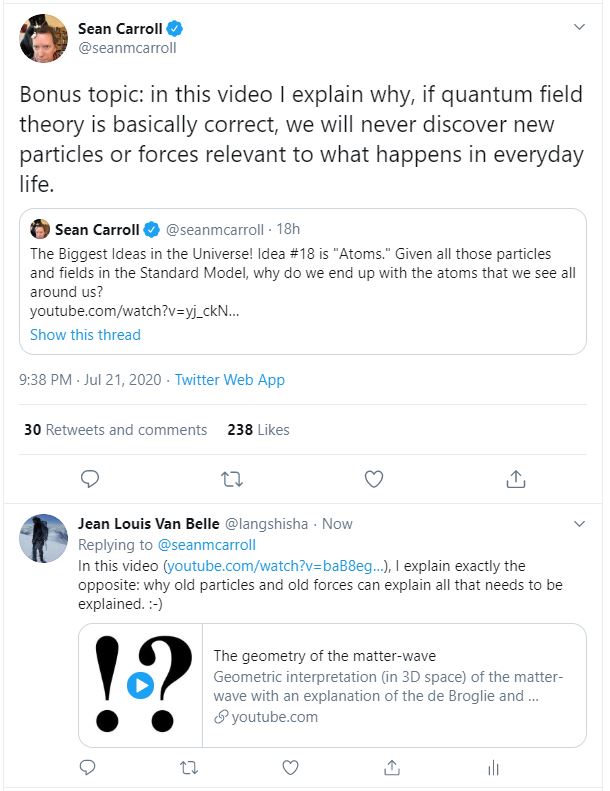 Post scriptum: I got the usual question, of course: if an electron is a ring current, then why doesn’t it radiate its energy away? The easy answer is: an electron is an electron and it doesn’t—for the same reason that an electron in an atomic orbital or a Cooper pair in a superconducting loop of current does not radiate energy away. The more difficult answer is a bit mysterious: it has got to do with flux quantization and, most importantly, with the Planck-Einstein relation. I cannot be too long here (this is just a footnote in a blog post) but the following elements should be noted:

1. The Planck-Einstein law embodies a (stable) wavicle: a wavicle respects the Planck-Einstein relation (E = h·f) as well as Einstein’s mass-energy equivalence relation (E = mc2). A wavicle will, therefore, carry energy but it will also pack one or more units of Planck’s quantum of action. Both the energy as well as this finite amount of physical action (Wirkung in German) will be conserved—cycle after cycle.

2. Hence, equilibrium states should be thought of as electromagnetic oscillations without friction. Indeed, it is the frictional element that explains the radiation of, say, an electron going up and down in an antenna and radiating some electromagnetic signal out. To add to this rather intuitive explanation, I should also remind you that it is the accelerations and decelerations of the electric charge in an antenna that generate the radio wave—not the motion as such. So one should, perhaps, think of a charge going round and round as moving like in a straight line—along some geodesic in its own space. That’s the metaphor, at least.

3. Technically, one needs to think in terms of quantized fluxes and Poynting vectors and energy transfers from kinetic to potential (and back) and from ‘electric’ to ‘magnetic’ (and back). In short, the electron really is an electromagnetic perpetuum mobile ! I know that sounds mystical (too) but then I never promised I would take all of the mystery away from quantum physics ! 🙂 If there would be no mystery left, I would not be interested in physics.

On the quantization of flux for superconducting loops: see, for example, http://electron6.phys.utk.edu/qm2/modules/m5-6/flux.htm. There is other stuff you may want to dig into too, like my alternative Principles of Physics, of course ! 🙂

We wrote about the significance of the 2012 University of Nebraska-Lincoln double-slit experiment with electrons before—as part of our Reading Feynman blog, to be precise. However, we did not have much of an understanding of matter-waves then. Hence, we talked about the de Broglie wavelength (λL = h/p) and tried to relate it to the interference pattern without any idea of what the concept of the de Broglie wavelength actually means. We, therefore, feel it is appropriate to revisit this subject as one of our very first entries for this new blog, which wants to probe a bit deeper.

Let us recall the basics of the model. We think of an electron as a pointlike charge in perpetual light-like motion (Schrödinger’s Zitterbewegung). The anomaly in the magnetic moment tells us the charge is pointlike but not dimensionless. Indeed, Schwinger’s α/2π factor for the anomaly is consistent with the idea of the classical electron radius being the radius of the pointlike charge, while the radius of its oscillation is equal to the Compton scattering radius of the electron. The two radii are related through the fine-structure constant (α ≈ 0.0073):

It is good to get some sense of the scales here—and of the scale of the slits that were used in the mentioned experiment (shown below). 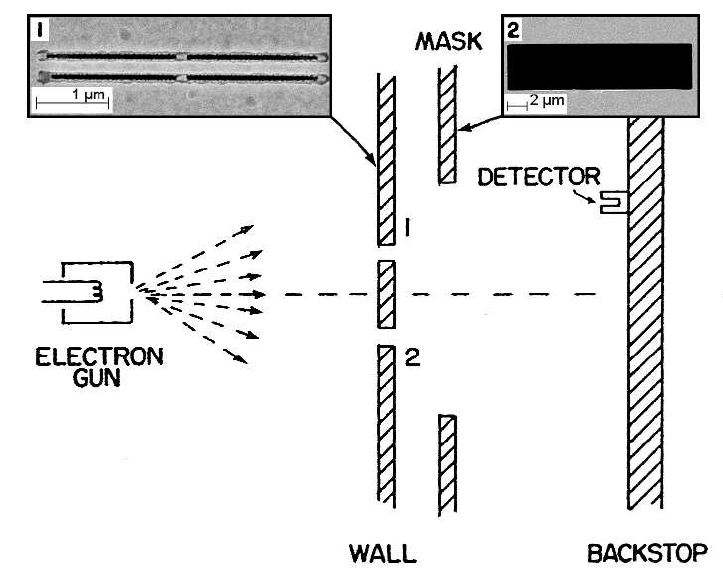 The insert in the upper-left corner shows the two slits: they are each 50 nanometer wide (50×10–9 m) and 4 micrometer tall (4×10–6 m). The thing in the middle of the slits is just a little support. Please do take a few seconds to contemplate the technology behind this feat: 50 nm is 50 millionths of a millimeter. Try to imagine dividing one millimeter in ten, and then one of these tenths in ten again, and again, and once again, again, and again. You just can’t imagine that, because our mind is used to addition/subtraction and, to some extent, with multiplication/division: our mind is not used to imaging numbers like 10–6 m or 10–15 m. Our mind is not used to imagine (negative) exponentiation because it is not an everyday phenomenon.

The second inset (in the upper-right corner) shows the mask that can be moved to close one or both slits partially, or to close them completely. It gives the interference patterns below (all illustrations here are taken from the original article—we hope the authors do not mind us popularizing their achievements). The inset (upper-left corner) shows the position of the mask vis-á-vis the slits. The electrons are fired one-by-one and, of course, few get through when the slits are closed or partly closed.

The one-by-one firing of the electrons is, without any doubt, the most remarkable thing about the whole experiment. Why do we say that? Because electron interference had already been demonstrated in 1927 (the Davisson-Germer experiment), just a few years after Louis de Broglie had advanced his hypothesis on the matter-wave. However, till this 2012 experiment, it had never been performed in exactly the same way as Feynman describes it in his 1963 Lectures on Quantum Mechanics. The illustration below shows how the interference pattern is being built up as the electrons go through the slit(s), one-by-one.

The challenge for us is to explain this interference pattern in terms of our electron model, which may be summarized in the illustration below, which we borrow from G. Vassallo and A. Di Tommaso (2019). It shows how the Compton radius of an electron must decrease as it gains linear momentum. Needless to say, the plane of oscillation of the pointlike charge is not necessarily perpendicular to the direction of motion. In fact, it is most likely not perpendicular to the line of motion, which explains why we write the de Broglie relation as a vector equation: λL = h/p. Such vector notation implies h and p can have different directions: h may not even have any fixed direction! It might wobble around in some regular or irregular motion itself!

The illustration shows that the Compton wavelength (the circumference of the circular motion becomes a linear wavelength as the classical velocity of the electron goes to c. It is now easy to derive the following formula for the de Broglie wavelength:

The graph below shows how the 1/γβ factor behaves: it is the green curve, which comes down from infinity (∞) to zero (0) as v goes from 0 to c (or, what amounts to the same, if β goes from 0 to 1). Illogical? We do not think so: the classical momentum p in the λL = h/p is equal to zero when v = 0, so we have a division by zero. Also note the de Broglie wavelength approaches the Compton wavelength of the electron when v approaches c, and that 1/γβ factor quickly reaches reasonable values: for β = 0.2, for example, 1/γβ is equal to 5, more or less. For higher velocities, the de Broglie wavelength is just three or two times the Compton wavelength—or less. Of course, a v = 0.2c velocity is substantial but not uncommon in such experiments.

These are remarkable relations, based on which it should be possible to derive what we refer to as the equivalent of the Huygens-Fresnel equations for electron interference.

Indeed, as far as we know, that has not been done yet. We are not quite sure if it can be done: an analysis of the interactions between the incoming electron and the electrons in the material of the slits must be hugely complicated, and we need to answer several difficult questions—first and foremost this: how does the pointlike charge – as opposed to the electromagnetic oscillation which keeps the charge in its orbit – go through the slit(s)? It must do so as a single blob—as opposed to the electromagnetic fields, which may or may not split up so as to produce the interference pattern.

What? May or may not split up? They should split up, right? Maybe. Maybe not. We are not so sure. We are not so sure. If we refer to interference in the context of two slits and diffraction when only one slit is open, then it is pretty obvious that the interference pattern that is produced when the two slits are open looks very much like the superposition of the two diffraction patterns that are produced by the electrons coming out of the individual slits. So, no, we do not buy the standard story here. Sorry.

So… What to say? We’ve got good ideas here—a good explanation but, in physics, the question is not (only) how but: how, exactly? The Zitterbewegung interpretation of an electron explains how diffraction and interference of an electron (with itself and/or with other electrons) might work but Zitterbewegung theorists still have some work to do to explain the how exactly. We think it can be done, however, and we therefore hope this post may inspire some smart students! The math is probably quite daunting, but then it is a rather nice PhD topic, isn’t it? And a decent quantitative explanation (as opposed to our qualitative explanation here) would sure make waves! 🙂

Post scriptum: We should, perhaps, also add a few remarks on some of the likely technicalities for the calculations. The shape of the wave combines the characteristics of transverse and longitudinal waves. It may, therefore, be very difficult to model this. The combination of linear and circular motion probably also involves some combination of plane, cylindrical and spherical wave geometry. In our paper on the geometric interpretation of de Broglie wavelength, we actually distinguished three different wavelength concepts which can be related through Menaechmus‘ latus rectum formula. To this, one should then add the intricacies of diffraction and interference.

Fortunately, there is a lot more quantitative analysis material now: this is a link to a good 2019 article which, in turn, has a good bibliography with links to many other good articles. I find the research by Frabboni, Gazzadi, Grillo and Pozzi particularly interesting. The point is: you are probably not going to produce a decent classical mathematical model of what’s actually going on overnight! 🙂 But it should be possible: the fact that this 1/γβ factor quickly reaches reasonable values, is very encouraging!

At the same time, one has to carefully relate scales and electron energies. The kinetic energy of the electrons in the Nebraska-Lincoln experiment was 600 eV only, so the electrons were quite slow (to accelerate electrons to a velocity of 0.2c, you need to apply something like 11,000 eV). Again, the analysis is not going to be easy, but if you want to be a physicist, you should surely try your hand at it! 🙂

Oh—one more thing: you will say this blog post is all about QED—as opposed to the stated objective of this blog. Well… You are right, of course, but then my thought processes are not exactly linear. 🙂